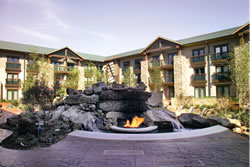 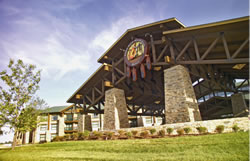 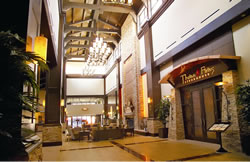 DESCRIPTION: The new $36 million expansion at the hotel and casino near Mayetta, Kansas tripled the casino’s hotel capacity and added a steakhouse restaurant and 12,000-square-foot convention center. To the existing hotel’s 100 rooms, another 198 rooms were attached as well as a new lobby constructed to connect the two three-story structures.

The casino’s current Las Vegas-style decor was replaced with a facade that reflects its ties to the American Indian community. Tribal Chairman Zach Pahmahmie said, “Prairie Band Potawatomi Nation has truly become self-sufficient through the development and operation of our casino.”

Harrah’s Prairie Band Casino is one of the top tourism destinations in the state, last year drawing 1.5 million guests.

Project Architect Robert Lee, AIA of Hnedak Bobo Group, with offices in Memphis and Las Vegas writes, “Manning Construction never wavered from the same ultimate goal; to provide both a quality service and an end product that the Owner and everyone involved could be proud of”.

Manning Construction Co. works with a number of entertainment businesses, including AMC, and has targeted the casino industry as another niche market.